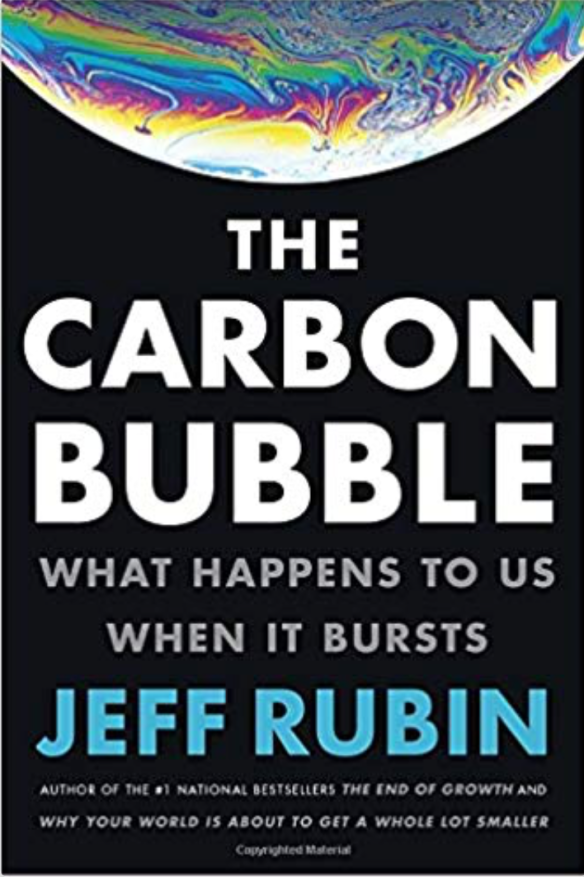 I know. I know. I did it again. This is not a book about cycling. At least not directly. But it is a book we all need to read.
The Carbon Bubble by Jeff Rubin is an macroeconomic account of climate change, and the consequences to Canada’s economy.
The book starts by criticizing Prime Minister Stephen Harper for not believing in global warming, and building Canada’s economic future on the development of Alberta’s oil sands. What he failed to understand is that oil sand production is dependent on oil prices. It is very costly, and carbon intensive, to produce. It is not economically justifiable to extract this oil unless the cost of oil is above $80 / barrel. Today, it is $52 / barrel. As a consequence, many Albertans are out of work, and there is waining support for increasing pipeline capacity to get the oil to off-shore markets. There are several reasons for the lower price – increase in the use of natural gas which is less expensive, the introduction of fracking has reduced the cost of oil production in the US and as a result, they need less of the Canadian oil, and the growing concern about the implications of global warming. It no longer makes economic sense to extract the oil sands bitumen. Stephen Harper failed to realize this.
The book goes into great detail about these costs and alternative energy sources, but what I think is important to understand, and discuss, are the opportunities that will be created by global warming for Canada.The book argues not to invest in oil companies. They represent a sunset industry. An industry that has a limited future. Global warming is going to change where food is grown, and how it is going to be irrigated. The North American food basket is going to shift from Mexico and the souther US, where it is going to become to hot, and move northward to the Canadian Prairies. And, Canada has an abundance of water to not only irrigate these farmlands but to also produce clean, hydro-electric power that can be export across the country and to the US. Canada’s major resources won’t be oil, as Prime Minister Harper suggested, but food, water, and hydro-electric power.
This is the basic premise of the book. Food, water, and electricity will become the economic engines of the Canadian economy, and this will happen in your life time. Now is the time to invest in farmland he argues not in pipelines or bitumen extraction.
If you have not read this book, and are interested in the political and economic relationship between Canada and the United States, I suggest you get your hands on a copy. It puts the contrasting perspectives of the Trump Administration and the Trudeau government in context.