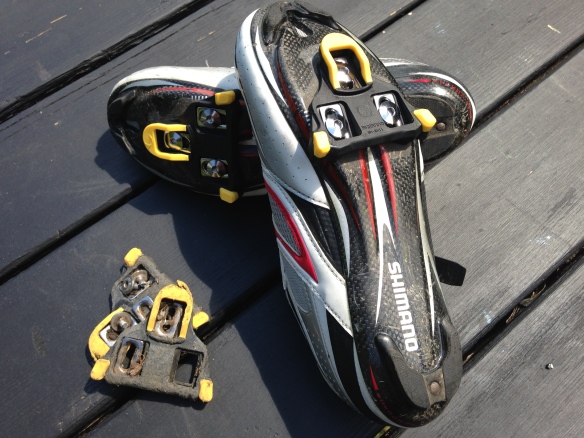 A few days ago, I purchased a set of new cleats for my Shimano shoes. The old ones had become worn, and dangerous. Yes. Dangerous. Difficult to clip in, and sometimes they would come out when standing to climb or pushing a large gear. That’s not good.

What a difference. Easy to clip in. Solid when climbing. I hadn’t realized how worn the old ones had become. They should have been replaced months ago. I knew it. I was just lazy. Maybe cheap. I have a new pair of road shoes (and cleats) and just thought I could get some extra miles out of them since I was wearing the new shoes half the time.

The Shimano SPD SL Cleats are available in 3 options (and colours) – Red are fixed; Yellow have 6 degrees of float; and Blue allows 2 degrees of float. Float is the amount of movement the cleat allows. If the foot can move left-to-right and up-and-down, less strain is put on the knees. Some professional cyclists prefer no float cleats believing they deliver more power to the pedals.

Not me. I don’t want any more problems with my knees than I already have. So I ride with the Yellow pedals which allow my foot to move a little from left-to-right and up-and-down.

Lou: “The Red ones would look good with the shoes and frame. There is no Yellow on the bike. Or Blue.”

This is one accessory I don’t coordinate with the bikes.