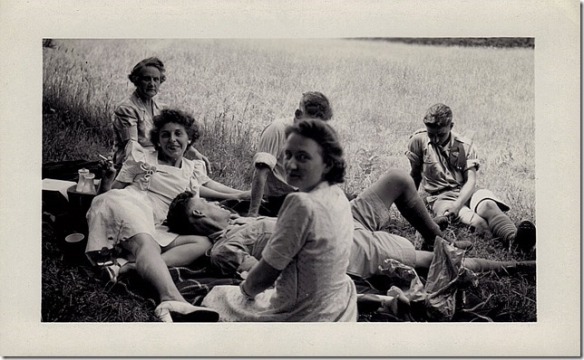 I was chic(ed) on Mother’s Day. How appropriate.

I lost my Mom 15 years ago. Well, I didn’t misplace her. I know where she is. That’s her lying in the grass with my Dad’s head in her lap while he was waiting to be shipped overseas in 1944.

To commemorate my mother, and all of the other mother’s in my life, I did what all avid cyclists would do, I registered for a 100 km bike race. I never cycled with my mother. It wasn’t her sport. She was a competitive swimmer in her day. But yesterday, I shared a ride with her.

This race turned out very differently than I expected, and it was because of 5 wonderful women, some of whom were also mothers.

I don’t usually race 100 km rides. I am more accustomed to brevet style events which tend to be more casual, and more relaxed. We put in a good effort, but I would not call it a race. Yesterday was different. I didn’t plan it that way, but these women took me to a new level.

I started the race at the head of the pack. I didn’t expect to keep pace for the entire 100 km. I simply wanted to get off the line early so as not to be slowed down by the mass of riders at the start. And, I did well. I kept pace for the first 10 km until a couple of red lights broke up the group and I lagged behind.

I was alone riding through very scenic rural countryside with a view of the mountains to the north. I thought, if nothing else this ride will be enjoyable. Shortly thereafter a woman got on my wheel, and began talking about all of her touring expeditions to Europe, Vietnam and the US. Again, I thought this won’t be fast but a pleasant ride in the country.

We were keeping a decent pace, each taking a turn pulling. At one point she cranked the pace up to 30 kph, and turning her head, asked “Is this pace OK?”. She was 20 years younger than me, and must have thought I was too old for this.

A few kilometres later we were joined by another 2 women. They were experienced racers, and were training for an upcoming ironman. We got on their wheel, wondering if we could keep up. No problem. We each took turns at the front, and we began averaging 35+ kph.

A few kilometres later, another 2 young women hopped on the train. One was a PhD student training for a half-triathelon, and the other was a middle-aged, powerfully built mother of 2. Now we were 6. Me, and 5 much younger women. We didn’t know one another, and yet we gelled as a group immediately, each taking turns at the front, staying tight on one another’s wheel while maintaining that 35+ kph pace for 50 km.

I felt like I could go faster, but I wasn’t certain if I could maintain the pace for 100 km. At the 50 km mark we hit the hills. For almost 20 kilometres we had climb after climb, one at a 19% grade. You can imagine what that did to our little group. But at the the 75 km mark, we were back together, sharing the load once again.

Women are different. I am not used to cycling with them often, but after yesterday’s experience, I hope to do it more often. First, I was surprised to see how competitive, and strong they were. Then I noticed how supportive they were to one another. If someone fell off the back, another would yell out “Soft pedal”, and we would slow down enabling her to get back on the train. When a rider would peel off the front, as she passed each of us behind, we would all thank her for her hard work pulling. This was a no-drop, supportive group that was having fun pushing one another to another level.

These women made me think of my mother, and how supportive she was throughout my life. She never left me behind, and was always there for me. And, more than anyone, she pushed me to be better, to be all I could be. These women did the same. Some of them were young enough to be my daughter, and yet they made me feel part of the group, encouraged me, never letting me drop off, and one in particular pushed me to my limit only leaving me behind on the very last climb of the day.

We finished the race in 4 hours averaging 25 kph. We would have been a lot faster had it not been for 20 km of climbing, our no-drop attitude, and the fact we got lost once.

So Mom, this race was for you, and all of the other mother’s out there.