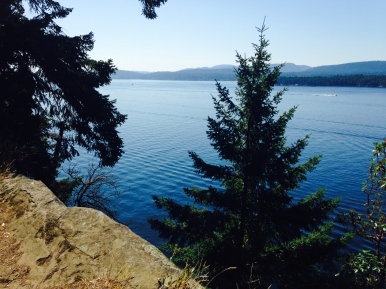 I have been wanting to cycle Galiano Island for years.  It is one of the Gulf Islands immediately west of Vancouver across the Straight of Georgia and, the only one suitable for cycling, at least for some distance.

Yesterday day was the day.

Cycling Galiano was much different than I expected.

First, it is hilly.  Very hilly.  The islands are rock and, as a consequence, most roads are not graded. They follow the natural contours of the land which is often steep.  Very steep.  This is not a ride for the inexperienced.

Second, the one primary road that runs the length of the island is in the forest most of the time.  I expected frequent scenic ocean views but this was a good thing.  You are cycling most of the time in the shade of large trees.  There were places to stop to catch a view but they were few and far between but most worthwhile.

From the car park at the Tsawwassen Ferry Terminal and back we clocked 70 km averaging 17.4 km / hour.  This tells the story.  On some of the flats we averaged 43 km / hour.  Not bad without the benefit of drafting.  Some descents were in excess 60 kph.  But, some climbs were at an 8 kph pace.  Some were steep but fortunately relatively short.  The last climb of the day was 2 km and was the worst.  At the top of the climb looking back we saw a sign saying 12% grade ahead.  That would be an average.  There were sections much steeper than that.  We estimated 20%.  It is hard to know.  At times we actually had to use the full width of the road and zig zag our way up.

I was glad to have a pair of 30 year old legs for support.  To keep me going.  My son is a much stronger rider but gracious enough to set a suitable pace for us both.

I am already thinking about next years ride.